Cantal was born 2000 years ago in Haute Auvergne.

This heavy, solid and stocky cylinder was a constant source of food and trading product for the inhabitants of this isolated region.

Cantal’s fruity taste has proven popular since the olden days. Its fame grew both quickly and beyond its borders: the “Natural History” by Pliny the Elder referred to it as the most popular cheeses in Roma and it is also quoted in literature, in particular, the Encyclopaedia of Diderot. Today, this unique and inimitable cheese is still produced on the same land. It draws its strength from its volcanic lands and its mildness from the high pastures bathed in sunshine. The production area is also called the “Green Country” (600,000 ha). It is based on a mass of extinct volcanoes, the Puys, culminating at 1,858 m at “the Plomb du Cantal”, from where it got its name.

It is an uncooked pressed cow’s milk cheese, with a curved wheel shape that weighs 35 to 45 kg. It can be made of raw milk or pasteurised milk (made in the dairy or on the farm). It comes in young, semi-old and old.

The rind of the Cantal is gradually formed during ripening and while its colour darkens, its thickness increases.

With these 3 stages of ripening, the Cantal’s flavours are reinforced and the pleasures of tasting too.

It takes 400 L of milk to make a Fourme de Cantal.

The whole Cantal manufacturing process is carried out in a minimum of 33 hours.

Store between 4 and 6 degrees.

The Cantal of Paul Dischamp 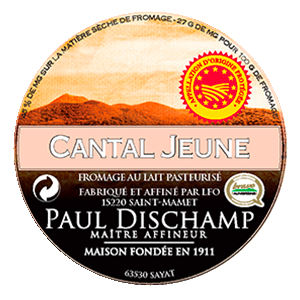 With 30 to 60 days of ripening it is “Young”, with a fresh and milky flavour in fine white-grey rind. 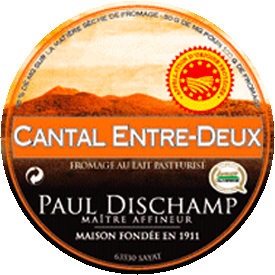 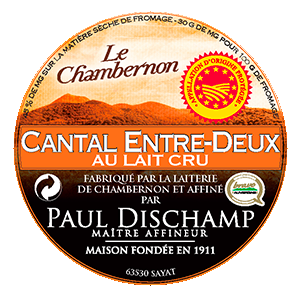 From 90 to 210 days of ripening it takes on a gold aspect, its taste blooms and becomes more pronounced. 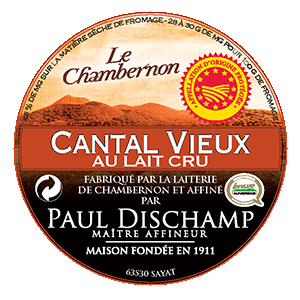 After ripening for at least 240 days, it becomes “Old”. Our Cantal Vieux au lait cru has powerful, spicy and strong aromas.

The other PDO Paul Dischamp

Our other ranges of cheese